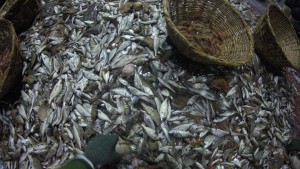 Sorting bycatch in the Gulf of California

Bycatch is a co-produced art-science project that combines geohumanities, political ecology, poetics, art, and marine ecology to creatively respond to the shrimp trawling industry in the Gulf of California. “Bycatch” refers to everything captured that is not the target species, so in this case, everything that is not shrimp. Approximately 87% of the weight of catch by shrimp trawlers is made up of 225+ species of bycatch fish, invertebrates, and reptiles. The majority of shrimp caught in the industry is sold in the U.S.

I have collaborated with marine biologist and illustrator Maria Johnson on this project as part of the Next-Gen 6&6 Art + Science initiative. The field work for this collaboration has included overnight trips aboard shrimp trawlers off of Bahía Kino, Sonora, Mexico. Poems and drawings from this project have appeared in Zócalo Magazine, Edible Baja Arizona, Terrain.org, and Coordinates Society Magazine, and we published an article on the project in the journal cultural geographies.

You can also read about the first incarnation of our Bycatch exhibit on Stanford’s Millenium Alliance for Humanity and Biosphere (MAHB) blog.