“6&6: A Transdisciplinary Approach to Art–Science Collaboration,” an article about our project that brought 6 artists and 6 scientists together for art-sci collaboration around the Sonoran Desert and Gulf of California, is now published in Bioscience.

Posted by eric  in Events, News

The 6&6 art-science exhibit at the University of Arizona Museum of Art is up through March 31, 2019. My collaboration with Maria Johnson, Bycatch, is included in this exhibit.

The new issue of Green Humanities: A Journal of Ecological Thought in Literature, Philosophy & the Arts (Volume 2) includes my poem “home/practice.”

Also, over at Stanford’s Millennium Alliance for Humanity and the Biosphere (MAHB), Erika Gavenus has written a nice feature on my collaboration with Maria Johnson called Bycatch – The Complexities of Shrimp Trawling in the Gulf of California: A collaboration between Maria Johnson and Eric Magrane.

Bycatch Exhibit at University of Arizona Museum of Art

Posted by eric  in Events, News 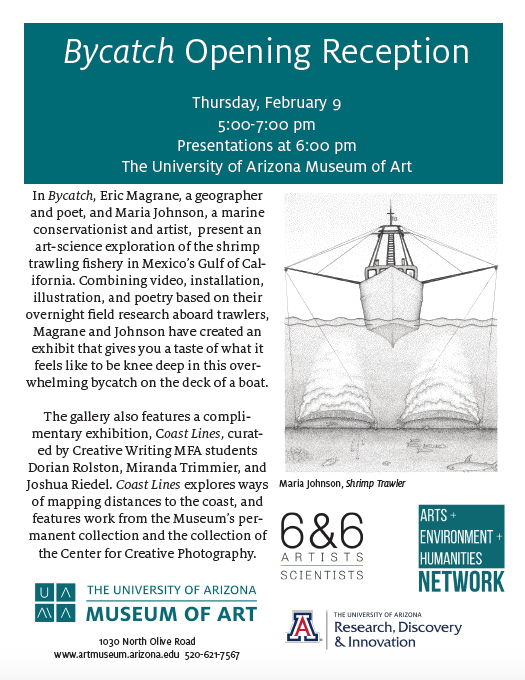 Bycatch poems and drawings in Zócalo and Coordinates Society Magazine

Early poems and drawings from Bycatch appear in April’s Zócalo and at the new online Coordinates Society Magazine. 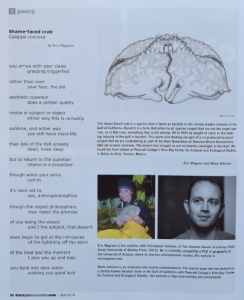 Bycatch is a co-produced art-science project that combines geohumanities, political ecology, poetics, art, and marine ecology to creatively respond to the shrimp trawling industry in the Gulf of California. “Bycatch” refers to everything captured that is not the target species, so in this case, everything that is not shrimp. Approximately 87% of the weight of catch by shrimp trawlers is made up of 225+ species of bycatch fish, invertebrates, and turtles. The majority of shrimp caught in the industry is sold in the U.S.

I am collaborating with marine biologist and illustrator Maria Johnson on this project as part of the Next-Gen 6&6 Art + Science initiative. The field work for this collaboration has included overnight trips aboard shrimp trawlers off of Bahía de Kino, Sonora.